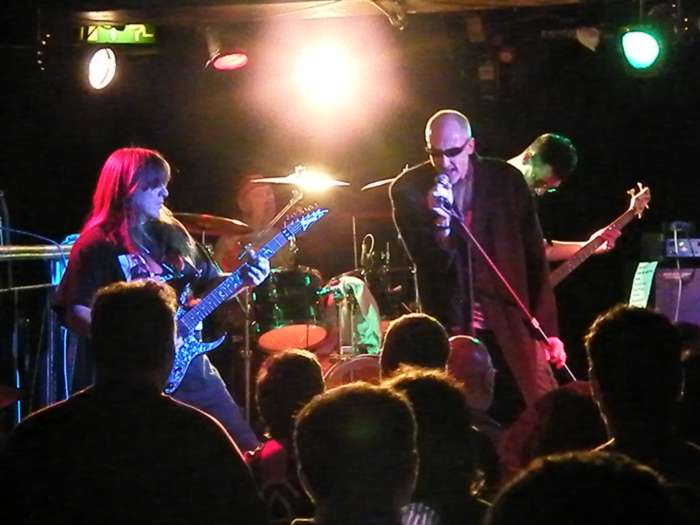 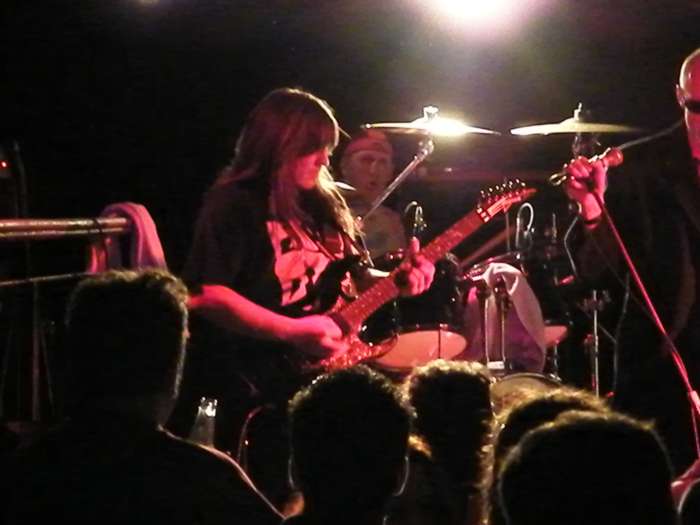 The following is an extract of the total festival review by
http://rockofages.wordpress.com

“Lyadrive” were next on and were quite simply a revelation. As feet
landed on the monitors onstage, a crowd assembled in front of the stage
and an atmosphere started to build. Did anybody expect them to grasp the
nettle to this extent and play such a blinder? A glimpse at Malc
MacMillan’s essential “NWOBHM Encyclopaedia” will tell you how highly
regarded this band were, and perhaps how unjust it was that their
début album didn’t actually surface until 1996. It’s also possible
that they may share the same tour manager as Halley’s Comet – their last live
appearance being 1999. Importantly though they recognised that the
festival was a celebration of a time in British music and through singer
Nick John’s well placed comments they certainly endeared themselves to
an appreciative audience. He noted Maiden’s worldwide success, Mantis’s
Japanese legacy and their own trip for a gig in Great Yarmouth. They
paid homage to America’s “honorary nwobhm-sters” “Riot” with a storming
version of “Warrior“, nodded once again to fellow early 80s band
Trespass with a blast through their own version of the classic “One Of
These Days“, unleashed their own should-have-been classics like “Steal
Away The Night” and “Lazerwind“, whilst showing that the engine’s till
running by including new track “Black Waters Rising“.

A nice touch was original guitarist Steve Jones travelling thousands
of miles from Alaska to join the band for one song, whilst the bass
players swapped mid-set too ensuring seven of the band’s membership
played some part in the proceedings.

Kudos too must go to Lyadrive for being the only act to have
vinyl product on sale on the day, and new vinyl product at that! Through
German label “High Roller Records“, the band have just released “The
Sands Of Time : Sessions 1980-82“. An archive collection, it features
some of the tracks that were re-recorded for the eventual début release
“Another Time Another Place“, along with a few other rarities including
the tracks that made the much sought after 1984 7″ single that ensures
interest in the band has continued into the new millennium. Extensive
sleeve notes courtesy of Nick John and drummer Lee Burrows make for
interesting reading and once again the band’s pleasure to have simply
been part of the scene comes through. A fine release for any nwobhm
collector but beware though… it’s a very limited edition!

It’s worth noting too that Lyadrive don’t seem content to rest
on their laurels as a CD wrapping up their recordings since the début
album “Post Millenium Blues” also premièred at the festival, details of
which can be found on www.lyadrive.co.uk and on the band’s myspace page.
And just in case anyone thinks I’m biased in any way toward a band I
think are well worth checking out, the post gig discussion on the Planet
Rock forums were the first to mark them down as the band who stole the
show… and far be it from me to disagree! 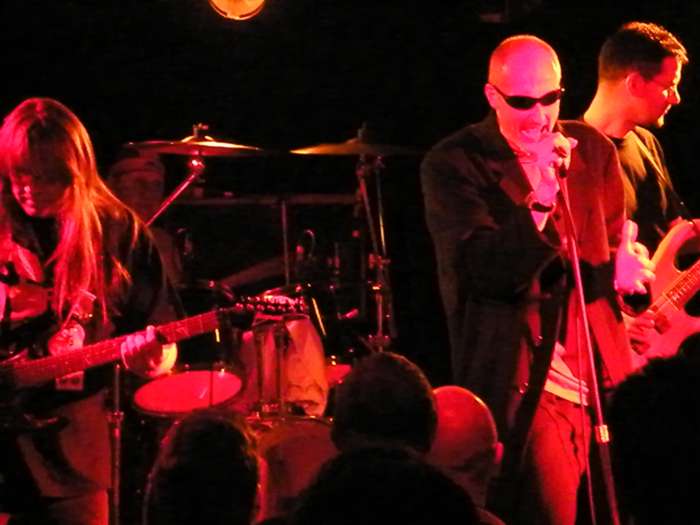 The following is an extract of the total festival review by
http://www.johntuckeronline.com/

LYADRIVE only managed one single – ‘Anytime’ – back in 1984, but
have been more prolific since getting back together later in the
Nineties. Things get a bit confusing in terms of the line-up, so as
drummer Lee Burrows explains, “There was me at the back, Paul
‘Rhino’ Ryan on guitars, Nick John front and centre, Steve
Christiansen – bass one, Guy Wilson – bass two, Graham Stuart on
guitar and Steve Jones on guest guitar! Basically, we had a dilemma:
Steve was our original bassist (he left the band in ’82), but over
the last five or six years we have forgiven him and he was always a
top bloke! But Guy is the man who recorded the ‘Another Time Another
Place’ CD. Seeing as this was seen initially as a oneoff gig, we
didn’t see any reason why they couldn’t do half a set each. And
along with Nick and I, Steve Jones was ever-present in the ’81 to
’85 line up. He moved to Alaska many moons ago and lost the mojo.
Luckily, he recently found it again and came over in 2007 to record
‘Black Waters Rising’. He fancied doing the gig but obviously
couldn’t make rehearsals, so a compromise was reached: come back to
Blighty for a week, visit family and friends, do a four-minute
number at the Underworld and return to the ice and snow! Simple!”
Lyadrive are a solid band with a diverse range of songs and an
imposing frontman, although given the amount of material they’ve
amassed, covers of Riot’s ‘Warrior’ and Trespass’s ‘One Of These
Days’ occupied set time which I would rather have spent listening to
more of the band’s own compositions. Still, they made great use of
their forty minutes, and I for one am looking forwards to hearing
more from them. 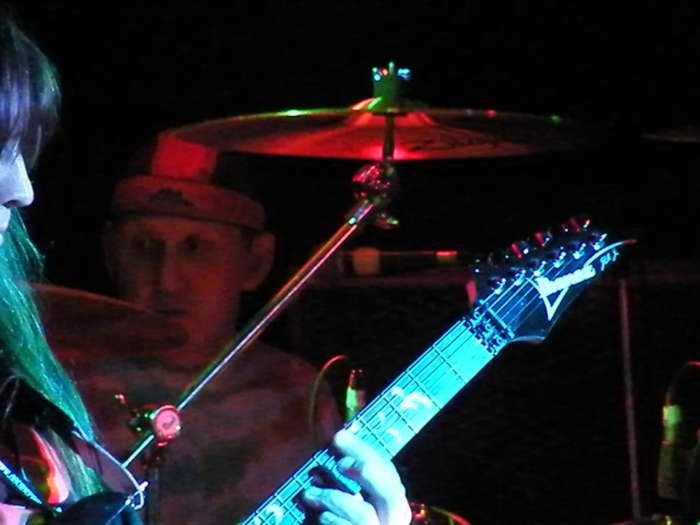 The following is an extract of the total festival review by
http://www.fromburntonow.it/

Before Lyadrive performance I go back to the merchandise stands
to buy some of the stuff, like the LP version of “Another Time,
Another Place” and the new release from Lyadrive and, of course, the
festival t-shirt, than we come back under the stage to wait for the
band to come. Lyadrive have recently re-united after twenty years
from thei split-up and released a new album called “Post Millennium
Blues” and some old songs collected togheter in a limited LP called
“The Sands of Time: sessions 1980-82”. When I see those bands
reuniting after many years some doubts always rise up to my mind
thinking about how the performance would be, but when their
performance starts, all those worries disappear! We are in front of
a super-band! They start with “Whitedress” followed by their cult
song “Another time, another place”. Nick John has lot of energy on
the stage, he shakes the microphone like David Coverdale usually
does (although he has a bit more space to do that!!). At the end of
the song he thanks the audience for being here and introduces the
next song this way: “Now we are going to execute a song from an
American band that can be considered ad honorem as a band memeber of
the NWOBHM movement”! The band is called Riot, and the song is
“Warrior”, the audience is enthusiastic! After “Black Waters”, is
time for another cover song, this time of an English band called
Trespass: this song is considered one of the best of the whole
NWOBHM movement, and is called “One of these Days”. Lyadrive already
covered that song and put it in their “Another time, another place”
release (produced by Vinyl Tap in 1997, including all songs that
have never been published). Immediately after the band starts with
their two final songs. The first one is “Lazerwind” (taken from
their 1998 release “Legends of Progressive”), great songs that shows
how the band is skilled and can play both HR and HM songs, and even
some progressive ones. Their music skills (like many other English
bands) cannot be brought into question, their solos are well played
and they rimain as pressed in your mind! The last track is “Steel
away the night”. As I said in other place or discussion, this song
reminds me “Fear of the Dark” from Iron Maiden (although it has been
written ten years before) not for the music but in the song
structure, and tempo changings (fast beginning and guitar
accelerations). Even the intro and John’s voice that starts slowly
and than rises up to reach high levels (like “Fear…” actually
does)! You have to listen to it, than you’ll make me know what you
think about. The performance is over, but the audience is still
enthusiastic for what they have been listening to (it couldn’t have
been different, the performance has been superb), even people who
didn’t know anything about the band. At this point, I start thinking
Lyadrive did the performance of the festival! I give you the
complete line-up: Nick John voice, Gary Wilson bass guitar, Keith
Thompson guitar, Graham Suart guitar, Steve Jones guitar, Lee
Burrows drums, Paul Ryan guitar, Steve Christiansen bass guitar. 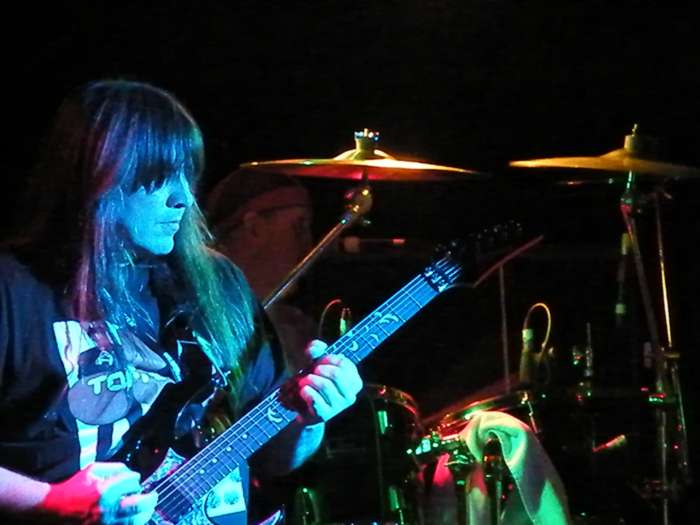