The band connects with Pete Hinton and Will Reid Dick (Saxon’s production team) in late 1981 prior to the band’s first recording sessions in Southall, Middlesex. Live favourite “ANOTHER TIME, ANOTHER PLACE” is recorded and released on the Bridge Records compilation album. The Track gets good reviews and is supported by Neal Kay at his Soundhouse Rock Nights as well as gaining pirate-radio airplay in London. The band crosses paths with Spider and Ten Records’ new-signings Outside Edge (ex-Blackfoot Sue) who still remain in touch in 1997!

Autumn 1982 sees the band travelling north to record a track for Ebony Records’ compilation “Metal Warriors” also featuring cuts by Shy (who later sign to RCA/BMG) and French act Sortilege. The original version of “WE’VE GOT THE ROCK” is one of the album’s best tracks and is considered by Ebony as a single for the band. Ebony release albums by Savage, Shy, and Grim Reaper in what becomes an exciting time for the NWOBHM!

Band sign with Bridge Records back in London for their first single, the double A-side “WHITE DRESS/ANYTIME” (now ultra- rare) and promote sales with constant gigging, from flea-pit to Dingwalls (on a bill with Blind Fury and Tilt), Ruskin Arms, Brunel University and beyond! The single draws reasonable reviews from Kerrang and New Musical Express as well as good local coverage.

The promo copy the of single receives cautious interest from CBS, with A+R Director Muff Winwood urging a London showcase. With classic timing, the band’s bass-player leaves on the eve of the CBS showcase! This severely shakes band morale and it is six months before they are gigging again with new material.

In the meantime, the band are signed by London-based company Loose Music/Brickyard Records for their first album, supported by single releases. The first of these is to be a 12-inch single featuring “YOUNG LOVER” (retitled “Give Me Wings”), “HERE COMES THE NIGHT” and a newly-recorded version of the Ebony favourite “WE’VE GOT THE ROCK”. The band record at Tin Pan Alley studios in Denmark Street in London. (These recordings feature as the three bonus tracks at the end of this album). Loose also release the first single from Xero, featuring Bruce Dickinson on guest vocals!

The band’s reputation as a noteable live attraction sees them gigging further from their London home, but in late 1984 as the single is again delayed by a company with internal financial problems, bassist Lee Reddings is poached by Bronz (fronted by Max Bacon and signed to Bronze Records, quarter-million sellers in the States: Max later fronting GTR with Steve Hackett and Steve Howe). This again severely disrupts the band’s live schedule and touring is again put on hold.

Spring 1985 sees the band embark (with yet another bassist) on their first national tour, including another slot at Dingwalls supporting Pretty Wykked and a later (unfulfilled) support backing American act Meanstreak. The tour proves disastrous, with cancelled shows and lack of label support, a situation which comes to a head with the complete collapse of the label whilst the band are on tour supporting a still unreleased single! Unsurprisingly, the bass-player is the first to leave mid-tour forcing the cancellation of the remaining dates in Gravesend, Warrington, Gloucester and the Midlands.

LYADRIVE # 2 begins rehearsals for album recording sessions with a new line-up in Summer 1996. Band consists of original vocalist Nick John and drummer Lee Burrows. Bassist Guy Wilson and guitarists Paul Ryan and Keith Thompson complete the line- up, Keith having played for many years in bands with Wurzel, prior to his joining Motorhead. 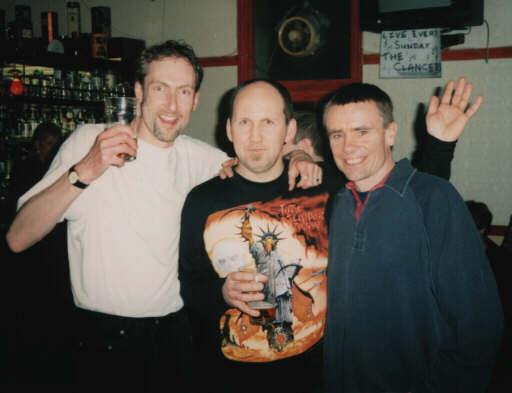