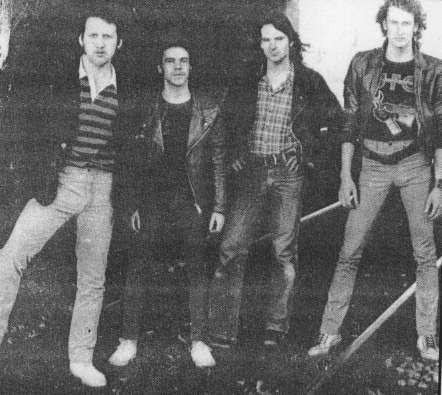 LYADRIVE, a Hillingdon-based commercial heavy rock band, are aiming for big things in the

New Year with an international promotions deal and a long overdue record release.

They first attracted attention just over a year ago with a track on The Bridge Album, a compilation LP put out by the Cowley-based Bridge Records featuring local bands.

The track, “Another Time, Another Place”, was seized on by Neil Kay, the heavy metal DJ who did so much to push Iron Maiden into the limelight. Neil played it around the clubs and it has become a firm favourite with Lyadrive fans.

The band’s first demo was powerful enough to persuade Ebony Records to sign them for a track on a compilation LP, Metal Warriors, which features a set of unsigned European bands.

Lyadrive are not as heavy as some of their European track neighbours, sounding more like Rainbow than Motorhead. But the album is receiving wide attention on the heavy metal circuit.

The band’s promotion deal could help their aims of bigger success with Dutch and German clubs in particular crying out for good quality British rock bands.

They’ve had several notable support slots to their credit with big-name bands like Liaison. And gigs lined up include the Ruskin Arms, Fast Ham, hot bed of Heavy rock, on December 5, the Roxhorrough, in Harrow on December 23 and a date at Heads, the Watford heavy metal club in January.

The single, Anytime, backed by White Dress, has been recorded and mixed and is just awaiting a release date on Bridge Records.

And there is a strong possibility that Ebony will put out their track from Metal Warriors, We’ve Got The Rock, on a single in the weeks ahead. 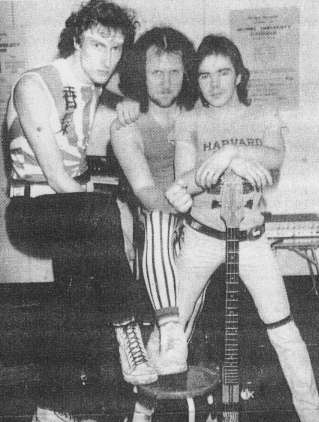 A track on a compilation album, Heavy Metal Warriors, has promoted their name on the continent, where heavy rock has a bigger market.

A European tour is in the offing and a new management and promotions deal could also pay off.

The next local gig for the boys will be at Brunel University on March 3 when seven bands line up for an explosion of rock sounds.

Tickets for this gig are available from Bridge Studios, in Iver Lane, Cowley.

DO you remember ‘Dennis’ and ‘Colin’ out of the Comic Strip’s ‘Bad News On Tour’ being peeved when leader ‘Vim’ was reluctant to admit that the band were out and out heavy metal I can imagine the same sort thing happening to Lyadrive if this single is anything to go by. They have a fine commercial song on their hands that shows they have more depth than many other hackneyed HM rockers. In Nick Johns, from Ealing, they have a more than adequate vocalist. Mike Donovan

A Pair pressed upon me a samples of home-grown headbanging, neither terribly heavy. Pali Gap (“Rainbow Bridge”?) are psychedelicists from Croydon, Lyadrive a pub-rock Blue Oyster Cult. “Anytime” is dare I say it rather Pretty.

A track on a compilation album, Heavy Metals Warriors, has promoted their name on the continent, where heavy rock has a bigger market. 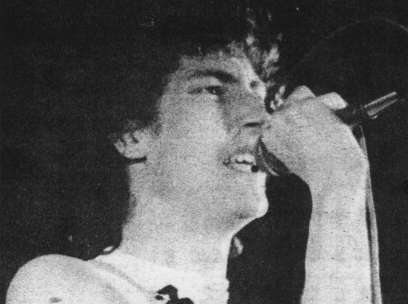 LYADRIVE were enterprising enough to bring a box load of their latest single to flog and they were next up. Once again an interesting band. Influences verged between Diamond Head and Camel to my ears. Their biggest problem was their intensity. They took a very long time to relax which is a shame as they really had nothing to be uptight about. Their songs were of high standard, especially an epic number entitled “Laserwind”. During Steal Away” and “Another time, Another place”, the guitarist turned out some first rate and inventive solos. Their vocalist, easily one of the tallest frontmen I have ever seen, possessed both good voice and movement.

Blind Fury and Lyadrive impressed most tonight with Tilt and extremely close second. I am not sure about the “5 Heavy Metal Bands for a £1” there was a lot of heavy but little metal. At 20p per band who am I to complain? MARK STOREY

Lyadrive were certainly an improvement, but suffered from a very dated approach which invested them with a painful lethargy that the first and drive of the lead guitarist never shook off. Their impressively tall vocalist has the potential to be a commanding performer but, as with the other bands, he was severely hampered by the lack of stage room and failed to make an impression. 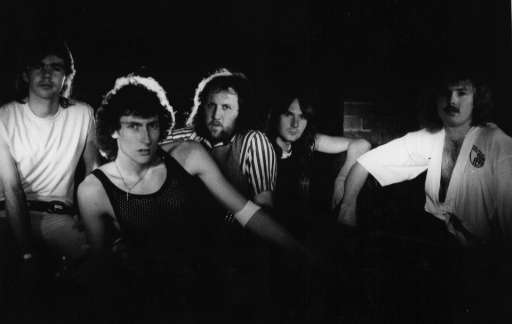 HARD rockers Lyadrive made quite an impact at their two open air concerts in Walpole Park last week. Letters of complaint poured in and council officials asked the Ealing based heavy outfit to turn down the sound after measuring their noise level from half a mile away, where it was still over the official decibel limit. The up and coming band, which is hoping to sign a record contract in the very near future, attracted over 100 fans for their second, quieter, concert and lead singer Nick John said: “The band wants to apologise if anyone was upset at the sound level. Meanwhile the band has set up a prestigious gig at Dingwall’s on September 19 in supporting touring American band Meanstreak.

Uxbridge-Based act Lyadrive have just completed work on a three-track 12″ single featuring the following songs: ‘Give me Wings (Young Lover)’. ‘We’ve got the Rock’ and ‘Here comes the night’. The band are currently negotiating an independent release for this record.

UXBRIDGE BAND Lyadrive have recruited bassist Lawrie Martin from No Sweat; he replaces the recently-departed Lee Reddings. The band are currently seeking suitable management. Interested parties can contact them via vocalist keyboardsman Nick Johns on: 01 842 0204.